The DMC DJ Battle Championships are to DJs what the Olympics are to athletes. DJs around the world spend years perfecting their skills and months preparing the perfect battle routine in hopes of gaining the coveted title of DMC world Champion and a bunch of cool prizes including Mixers from Rane.

Before becoming a World Champion DJs compete in regional DJ Battles and Finals. There are over a dozen DMC regional battles all over the United States. There are also battles in other countries to determine their champions and figure out who will represent their respective countries in the World Finals.

On March 29th 2015, Rane in association with DMC and The Solution presents the 2015 DMC Denver Regional DJ Battle at Casselman's Bar and Grill. This yearly battle often brings out Denver's best and most talented DJs as well as DJs from other states all ready to show their skills and compete for the Denver Regional Champion title and a chance to move on to the US Finals. and hopefully the World Finals.

In 2011 Denver's own DJ Chris Karns (previously known as DJ Vajra) did just that and went on to win the World Championship title as well. This year Chris Karns returns as a Judge along with DJ Revolution, Teeko and DJ Chonz of the Radio Bums and KS1075. To break up the rounds the evnt will also feature live showcases by DJs Chris Karns, Teeko and Revolution.

DJs in the battle must first participate in a 2 minute battle routine elimination set and the top Six finalists will then compete against each other performing a six minute battle routine with the winner moving on to the 2015 US DMC Finals and being crowned Denver's Regional DMC Champion. The top 3 also receive cool prizes. The Champion will Receive a RANE mixer, prize packages from Shure, Ortophon and 12inchSkinz, a month membership to the Beat Junkies Record Pool and round trip flight and hotel reservations to the US Finals (location and date to be announced)

Were pretty sure last years winner DJ ShakeOne (Ever Lee Bustos) will be back again this year to compete along with many other of Denver's best and most talented DJs. Don't miss this major event! And DJS start getting ready for next year if you aren't in it this year. Lets GO! 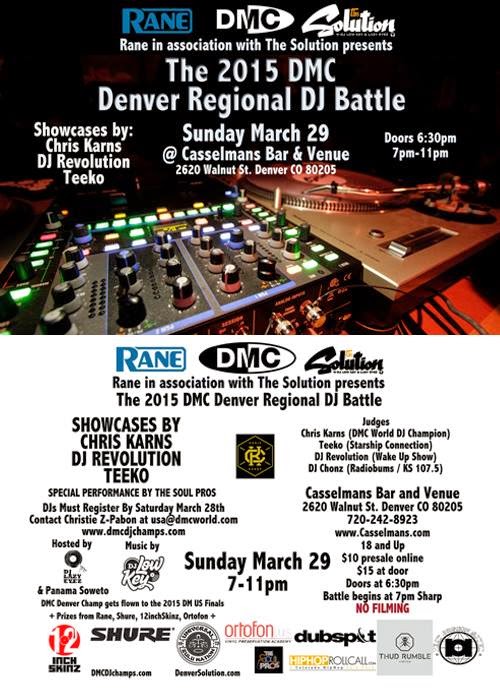 Posted by DJ Emir Mixtapes And Designs at 3:03 PM No comments: